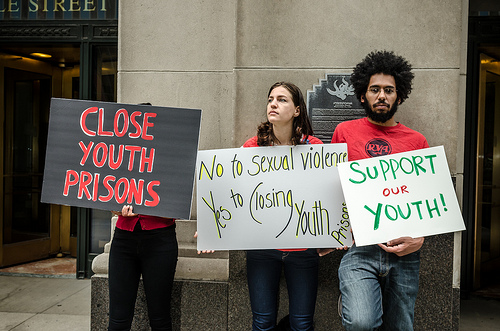 Marianne Bullock was just 19 when she was incarcerated. Two years later she gave birth to a child. Having experienced the criminal justice system first-hand, Bullock witnessed the dire need for reproductive support for incarcerated women.

When a new correctional facility for women opened near her town in western Massachusetts, she was stunned to hear it had no clinical program for pregnancy guidance, postpartum medicine, nor did it allow women to breastfeed their newborns. Bullock and Lisa Andrews, a fellow new mother whose life was also impacted by incarceration, started talking.

Within a year, the two young women both in their early to mid twenties, formed The Prison Birth Project. The organization now supports, educates, and advocates for incarcerated and formerly incarcerated women as well as those with history of substance abuse. From helping deliver their babies, to counseling them on reproductive care, the team at The Prison Birth Project has made a difference for so many women. It has also shaped local correctional facility policy.

“In an on-the-ground way, we are working with an invisible population – mothers in prison. Our services are a form of activism, of reform,” says Bullock.

Bullock’s profound story is one of many young adult’s who are working to reform the criminal justice system. With over 2.2 million people incarcerated in the US, mass incarceration is something our generation cannot ignore. Many teenagers and young adults have been directly impacted by the arrest of a parent, family member, or friend. Working with long-time community members and professionals, young people are using their time, skills and networks to reform what even Attorney General Eric Holder said has become “ineffective and unsustainable.”

There is no definitive list of the number of criminal justice reform groups in the US, so understanding the scope of their work is not easy. However, a look into some of these organizations reveals how much impact they have in the system. Stories from prison reform organizations also show the impact young people have in the movement.

Educated and engaged college students have historically always been critical to progressive movements. Their involvement in pushing criminal justice reform is no exception. Families and Friends of Louisiana’s Incarcerated Children (FFLIC) relies on an extensive network of college students to help prevent the incarceration of children and young adults in Louisiana, the prison capital of the world.

For FFLIC, the impact of youth involvement is twofold.

On the one hand, university students work with FFLIC to learn how to stop the school-to-prison pipeline. FFLIC works with a coalition of students who call themselves Students for Education Reform. The group consists of university students from Tulane University, Loyola, Gillet, and the University of New Orleans. Through activism, volunteer work and progressive reading groups on books such as The New Jim Crow, the students gain real world experience on what reform means.

“[Our coalitions] are changing the landscape of how young people see education. For many who may go into the system, a clear definition of what public safety really means will impact their work,” says Community Organizer Ernest Johnson.

At the same time, FFLIC works with young adults directly in at-risk communities in an effort to make direct change. In intergenerational working groups, young adults interact with their peers and older community members. These groups offer young adults an opportunity to gain insight from experience they may not have.

In Johnson’s own words, “It’s important to reach young adults — to help them confront peer pressure and to learn about the history of their communities — where we have come from and where we can go.”

Young adults are also making real, immediate change. Emily Patka decided she wanted to pursue her learning and advocacy for criminal justice reform after graduating with a degree in sociology from Binghamton University. Her involvement with The Prisoner Support Network, a student group at Binghamton that corresponds with the incarcerated across the country, gave her insight into the power of literacy in prisons.

After graduation, Patka started her work with Americorps VISTA in Loudonville, New York. The volunteer program gave her a real chance to work in the movement. She started working for the education program initiative between Siena College and Mt. McGregor Correctional Facility, commonly known as MMCI*. At the time, the program was running a zero dollar budget, with administrators and sympathetic faculty members pooling money for books and supplies and instructors teaching courses on an entirely volunteer basis. With help from the Office of Government and Foundation Relations at Siena College, Emily was able to secure $6,000 in grants for the program.

Because of Patka’s tireless work, MMCI will be building GED and college preparatory education with the help the Department of Corrections and Community Supervision (DOCCS), the Higher Education Services Corporation (HESC), and funding from The College Access Challenge Grant (CACG).

Considering national statistics, this improvement could significantly lower the correctional facility’s recidivism rate. The nationwide recidivism rate is 66 percent. the average recidivism rate for those who go through a college in prison program is between 15 and 20 percent.

As a liberal arts student and activist, Patka brings unique insight into prison education. She argues that offering a liberal arts education to the incarcerated gives them opportunities a vocational training may not.

“Vocational programs are incredibly important, but the liberal arts develop critical thinking skills that allow individuals to make more positive choices in the future. They develop communication skills and a sense of self-worth. This creates a resiliency when challenges inevitably arise inside prison and upon release,” says Patka.

The People For the American Way Foundation runs a national youth leadership development program,Young People For (YP4), that identifies and supports young leaders to create progressive change. A number of its fellows have worked with organizations dedicated to addressing mass incarceration.

Ribka Getachew was a YP4 national fellow in 2011. Currently, she works as a paralegal at The Innocence Project, a national litigation and public policy organization that works to exonerate the wrongfully convicted through DNA testing and reform.

She explains how personal the issue is for her. “By virtue of being a woman of color, i already am involved in our country’s criminal injustice system. So it wasn’t a choice, per se, to “get involved.” My intentionality in choosing to organize around and against mass incarceration and the prison industrial complex was a pretty organic decision. When i see someone getting illegally stop and frisked or arrested, for example, i don’t view them as a “random” individual, i recognize them as my sister or brother…” she says.

Across the country, young adults are joining the movement for criminal justice reform for personal, political, and social reasons. Whatever the reason, the change they are creating is real. From helping to reverse wrongful court decisions, to teaching the incarcerated, to even helping incarcerated women give birth — the work of young adults is changing a broken system.

This article originally appeared on BreakThruRadio.com