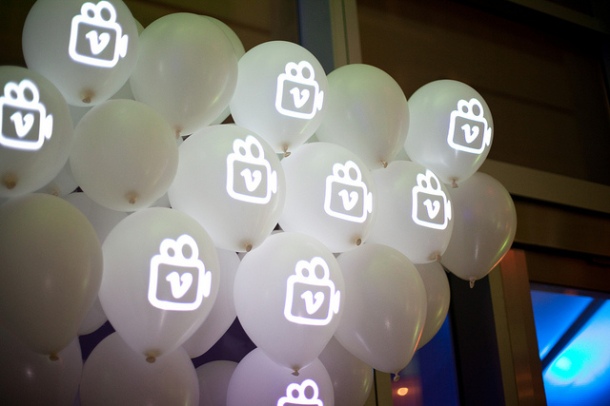 Vimeo is taking a leap of faith in the business power of art and originality. The video distribution company is offering filmmakers from the Toronto Film Festival a $10,000 advance for debuting their films digitally exclusively through Vimeo On Demand.  At the crux of the deal is a confidence in the digital selling power of burgeoning artists and the purchasing power of an ever curious online community. Filmmakers who accept the offer will receive a 90-10 revenue split, an unheard of offer in the film industry. In exchange, Vimeo owns the digital distribution rights to the film for 30 days, or until the filmmaker makes back the film’s advance — whichever comes first. After that period, the filmmaker can license his or her film to other platforms like Netflix or iTunes. For two years total, however, filmmakers must agree to keep their movies available online through Vimeo.”Ultimately, this gives hope to the indie community with a clear goal to work toward on a well established middle step between the cacophonous YouTube and the prestigious Netflix,” said Jon Novick, an MFA student at CUNY Hunter.The deal allows filmmakers to choose whether online viewers can rent or purchase their film through Vimeo. It also allows the filmmaker to set the price for how much his or her movie will cost the viewer, as long as that price is above $4.99. The deal does not prevent the filmmaker from distributing his or her film non-digitally.

“We’re firm believers in direct distribution,” said Vimeo’s CEO, Kerry Trainor, in an interview with IndieWire.“We are focused on empowering filmmakers with the highest quality platform to control the distribution and monetization of their content – in any territory, on any device, at any time, and across a wide range of price points.”

Since Vimeo On Demand is the first of its kind in the large-scale distribution of indie films, the $5 or so viewing cost might actually work. In lieu of buying a movie theater ticket to see the indie film, viewers can watch the content from their computers, Apple TVs, XBoxes, Rokus or other devices. However, since the deal does not prevent filmmakers from showing their films theatrically, filmmakers could still show their work at movie theaters.

The question then becomes how the independent-minded audience want to view it, which is where the real implications of Vimeo’s new deal may play out within the industry…

Debuting the offer in conjunction with one of the world’s largest film festivals also means capitalizing on the hype. In a statement to Hollywood Reporter, Cameron Bailey, artistic director for the Toronto International Film Festival said, “For any independent filmmaker trying to connect with an audience — and who isn’t? — this is a terrific new opportunity.”

At time when some of the big names in indie film are joining Vimeo On Demand, lesser-known filmmakers have the chance to join too. In its “Pro” package, Vimeo users can purchase distribution through Vimeo On Demand, in addition to other features like unlimited HD uploading for $199 per year.

“It’s the democratization of technology,” says Gordon. “Things like Kickstarter, YouTube, and Vimeo encourage people to produce content. Now, you can now make a feature film with a budget of $300.”

A connected and resourceful filmmaker, Gordon has created over 25 short feature films, has successfully funded a film through Kickstarter, and has a YouTube following of about 8,000 subscribers.

“Vimeo has flipped the switch, so to speak. You are empowered to monetize your own content,” he said.

Vimeo’s on demand feature is not just a one-way street for artists, however. By enabling more people to access independent film not normally played at commercial movie theaters, it has a democratizing effect on consumers.

“These platforms encourage people to give back, to participate as patrons of the arts by crowdfunding, purchasing, or simply viewing a film,” says Gordon.

Will other video platforms be inspired by Vimeo’s move to attract budding artistic talent? According to many filmmakers, this would be a smart move.

“My only criticism is not really a criticism. I think Vimeo should extend this type of deal, with less of an advance obviously, to smaller creators. Artists are just waiting for an opportunity like it,” Gordon said.

Whether or not Vimeo or another video platform extends this type of deal to more artists is left to speculation for now. Early success of Vimeo’s On Demand platform could mean a new way for original and ground-breaking talent in filmmaking to be discovered.

One thought on “A Big Deal for Indie Films”