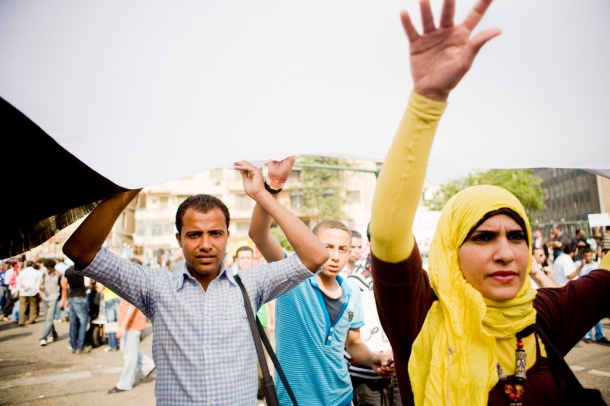 In a recent political salon, “Tunisia Three Years Later,” World Policy Institute hosted a roundtable conversation on the uprisings that shook the Middle East/North Africa (MENA). Embassy officials, journalists, nonprofit leaders, and interested newsies alike brought with them questions on the progress of the uprisings. Though not all questions could be definitively answered, as the political struggle wages on, the featured speakers offered insight unavailable on newsstands.

Leading the political salon was Maytha Alhassen, doctoral student at University of Southern California and journalist who has been featured in the The Nation and The Los Angeles Times, and Ahmed Shihab-Eldin, host and producer for HuffPost Live who has worked for The New York Times, PBS, and Al-Jazeera. They are the co-authors of “Demanding Dignity: Young Voices From the Front Lines of the Arab Revolutions”, a book that documents first-hand accounts of young activists who sparked the Arab uprisings. Setting aside their journalistic approach, if only for a few hours, Alhassen and Shihab-Eldin shared the very real connections they had to the Arab Spring.

Personal Insight
In the summer of 2011, Alhassen took a spontaneous trip through North Africa while attending an academic seminar in Spain. During her travels to Tunisia, Morocco, and Lebanon, she formed personal connections with many young people who would soon be at the forefront of the MENA uprisings. During her time in the region, she witnessed the beginnings of what would soon become mass protest. Her attempts to visit her parent’s homeland of Syria were stopped when violence grew.

At the same time, Shihab-Eldin, who had lived in Egypt for ten years, was in Washington D.C. developing Al-Jazeera’s The Stream. The talk show was designed to hone in on social media conversation and discuss under-reported news. In the first week of working for The Stream, he came across the hashtag #sidibouzid, the Twitter hashtag created in response to the self-immolation of  Muhammad Bouazizi that happened in the town of Sidi Bouazi, Tunisia. Immediately, he started following the thousands of posts from Tunisia expressing widespread anger and sadness over the harassment of the young fruit seller and the poverty, inequality, and repression he came to represent. It wouldn’t be long before protest and violent police brutality would overwhelm the region.

Shihab-Eldin shared what it was like to witness the takeover of Tahrir Square from a livestream on his laptop. Worlds away, he described the experience of witnessing a place he considers home catapult into hopeful, but dangerous revolt. “It was a very emotional experience. I was completely overwhelmed,” he said.

After re-posting photos from her connections in the region, Alhassen was approached to author a book about the Arab Spring. She connected with Shihab-Eldin, and the project was launched.

In the swift three years since the self-immolation of Muhammad Bouazizi, much has changed. There are many questions to be answered—and here are a few of the many that Alhassen and Shihab-Eldin addressed.

Similarities with Occupy?
At the start of the conversation, the authors were asked if the Arab Spring could be compared to the Occupy Wall Street, which would spark a national protest wave under the umbrella of the Occupy narrative. Could the similar grievances of economic inequality, unemployment and cuts to social subsidies make both protest movements comparable? The authors agreed that while some of the initial grievances that drove the Arab Spring were also behind Occupy Wall Street, the two were fundamentally different. “They are very similar in the sense that those behind the movement feel their self-determination isn’t being represented by your leaders or the people who are your government in your country. But that said, to compare America to any of these other countries is very difficult,” Shihab-Eldin said. The fundamental difference, for Shihab-Eldin, boils down to the “differently structured governments.” 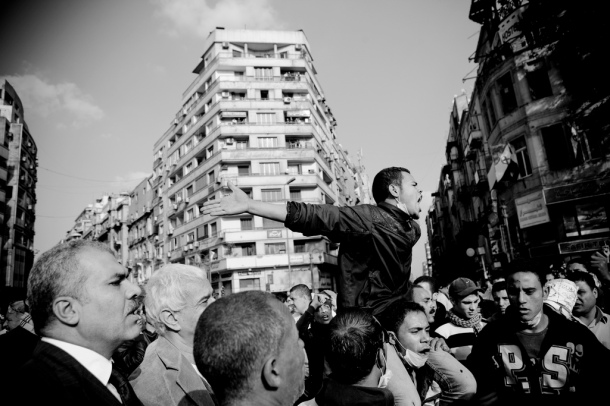 Foreign Influence
The conversation also touched upon the role of foreign governments in the MENA uprisings. Of particular interest was the role of the Gulf states in influencing the region’s political trajectory. Shihab-Eldin described the U.S.’s decreased role in the uprisings, and the rise of the political and economic influence from the Gulf states. “America, for better or worse as a result of these uprisings was in an incredibly difficult situation – you saw them fumbling when it came to Egypt and in Libya, there was high concern over natural resources and international exports,” he said. In the midst of scaling back its own war, financial recession, and embarking what many have coined “the pivot to Asia”, the U.S. role in the MENA uprisings was limited.

With a $60 billion dollar weapons deal with Saudi Arabia that began in 2010, the United States embarked on its biggest weapons deal in its history. With new financial backing, Saudi Arabia, like other wealthy countries in the Gulf, are positioned for greater political influence. “At the same time, you had the solidified, secure relationships with the Gulf countries and the MENA region. The Arab uprisings would have unfolded in a very different way had it not been for the billions of dollars from these Gulf counties with no strings attached, to places like Egypt from countries like Saudi Arabia and Qatar,” Shihab-Eldin said.

The Region’s Financial Future
As the citizens of Tunis and Cairo try to negotiate their political future, other actors have also taken center stage. Audience members were curious as to how the role of international financial institutions in the region’s future should be perceived. For Alhassen, their policies should be viewed with upmost caution. “People have done songs about the IMF and have tried to critically rally against IMF policies. The IMF has been a stick in the thorn of Egypt’s ability to move past its inflation and its rigid class structure that has created a new poor poor. I think this was part of the motivating drive for these uprisings – this utter state of undeniable poverty,” she said. Specifically, Alhassen is referring to the increased privatization, dismantling of tariffs and dangerously high inflation that resulted from policies in Tunisia and Egypt in the late 1980’s and early 1990’s. A disturbing example of these policies is the replacement of sustenance farming with luxury food production for international export—depriving Egyptians of critical crops in exchange for providing “exotic goods” to Western nations.

She continued to describe what that undeniable state of poverty looked like. “The fact that you had people squatting in grave yards and in trash, garbage dumps. It was undeniable that there was some sort of rooted history to that social experience. A lot of people were savvy about what those IMF policies were doing to their subsidies, to their social subsidies – which had been pretty significant under Nassar,” Alhassen said.

The Resonance of Youth Voices
Both Alhassen and Shihab-Eldin agree that at the core of the Middle East/North Africa’s power struggle are young adults with specific demands and the tools to organize themselves and their communities. While the political future of the uprisings is uncertain, it is clear that young adults will continue to play a vital role in the process. For first-hand accounts from young revolutionaries be sure to check out Alhassen and Shihab-Eldin’s “Demanding  Dignity.” Beyond a riveting read, it continues the public conversation on one of the most important political upheavals of our time.

Marguerite Ward is an editorial assistant at World Policy Journal.