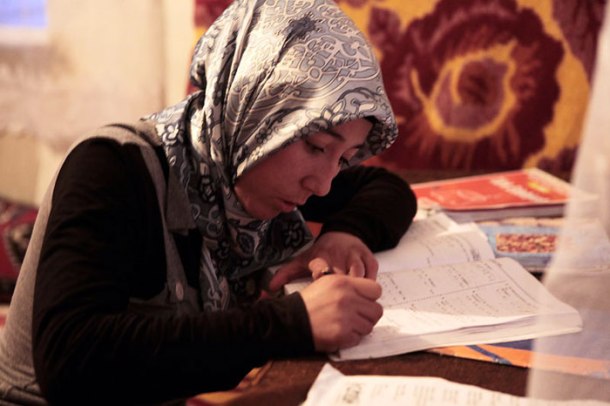 Turkey’s cities boast an impressive number of young female CEOs and increasing number of women in the workplace. The World Bank declares that “the gender gap in Turkey’s education system has virtually disappeared.” But a dark shadow lurks over the country’s rural Eastern and Southeastern regions, where 45 percent of all girls remain illiterate. This statistic is particularly staggering given Turkey’s law mandating eight years of compulsory education for boys and girls. How, then, do we explain the discrepancy?

Traveling to Southeast Turkey, film director Ayşegül Selenga Taşkent set out to answer this question. Her documentary, Girls of Hope, follows five girls—Yeliz, Meryem, Dilek, Besna, Zehra—who are fighting against their families and communities in an effort to gain educational access.

Unpaved roads, lack of running water, and decrepit buildings with dirt floors—the opening scenes from the documentary quickly reveal that in places like rural Turkey, poverty is a palpable reality. But Taşkent’s film reveals that poverty, when it manifests in a partiarchal setting, puts impossible constraints on young women and girls.

Even when these young women are lucky enough to receive a full scholarship to cover school expenses (books, lunch, etc.) and a stipend for attending school, families forbid them from attending. Fathers, brothers, and even some mothers, would rather marry their girls off or keep them at home than provide them educational opportunities.

Such was the case for Birgül, a girl featured in Girls of Hope (though not as prominent a character as the other five). Birgül was lucky enough to recieve a stipend offer from the Çağdaş Yaşamı Destekleme Derneği (CYDD), or the Foundation for Supporting Contemporary Life, an educational nonprofit and community service organization.

The CYDD coordinator traveled to Birgül’s house to share the news with her and her family. While the mother and father supported Birgül, her older brother did not. The teenage boy refused to let her accept the offer.

Birgül’s father was too feeble to argue against his son, and her mother—well, she’s a woman. In a staunchly patriarchal society, young men (boys in some cases) hold positions of power that trump all other formal systems of decision making. The parents, the professional coordinator, the supportive community members—all of these individuals come second to the desire of the “strongest” male in the family.

Having failed out of school himself, Birgül’s brother does not want to let her learn. He succeeds, and her dreams of becoming an English teacher are crushed.

Birgül’s story, however, is just one of many. Stark poverty and strict patriarchal beliefs force girls as young as seven into early, unwanted marriages or relegate them to household chores. In these societies, girls are not to venture far from the home. It is their duty to take care of the family – even if they have older, more capable brothers. Many are married off before they are 13 in swap deals, where the girls are traded for a male cousin or stepbrother.

Dilek, Besna, and other girls in the documentary talk of this trading system rather nonchalantly, accepting it as the norm. Attending school could threaten marriage prospects, so why risk it?

Despite being raised in Turkey, Taşkent never realized how pronounced the education gap was in rural parts of the country, she explained after a screening of her documentary at the New York Turkish Film Festival. She described how she came from an economically stable middle class family, living “worlds away” from the towns depicted in her film.

It was only when she visited the United States and people began questioning her about educational inequities in Turkey that she realized she had to go back. She had to make a film about the region’s education injustice—“the situation that doesn’t change.”

“All we want is to study,” Zehra, one of the girls said in the film.

For thousands of impoverished young women in Eastern and Southeastern Turkey, education means the difference between a life of impoverished matrimony and personal freedom.

Meryem, another one of the central characters, is fortunate to have parents who support her educational goals. She walks over an hour on a dirt road to school—through rain, sleet, and snow. And yet, she describes it as “joyful.” She says, “I know through these hardships lies my road to college.”

Organizations like CYDD continue to fight for girls education. Through the tireless work of people like the CYDD program coordinator featured in Girls of Hope, the number of girls in classrooms in Southeastern Turkey increased nearly 7 percent from 2009 to 2010. To date, CYDD has successfully given primary and university scholarships to nearly 118,000 girls. But it’s not enough. Advocates, including some of the panelists at the New York Turkish Film Festival, urge Turkey’s government to increase the compulsory education requirement from eight to 15 years.

As several of the girls explain, once one girl goes to school, other families consider sending theirs to school as well. With a concerted effort by the Turkish government and increased support to organizations such as CYDD, the lives of these young women could change forever.

[Photos courtesy of Girls of Hope]